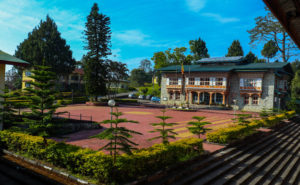 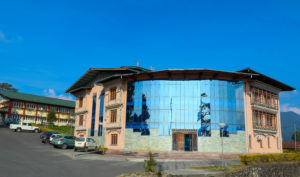 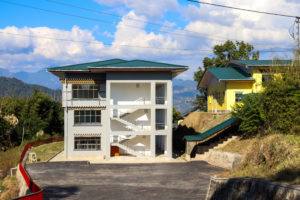 The Jigme Namgyel Engineering College (JNEC) is one of the constituent colleges of the Royal University of Bhutan (RUB). The college was formerly known as the Royal Bhutan Polytechnic, Royal Bhutan Institute of Technology and Jigme Namgyel Polytechnic. It is beautifully located atop a hill overlooking the small town of Dewathang at an altitude of approximately 880 m above the mean sea level. Dewathang is 18 kilometers from Samdrup Jongkhar town, second gateway to Bhutan from Assam in India.

The College started with the infrastructure development in 1972 coinciding with the 3rd Five Year Development Plan of the country and the College was formally launched as the Royal Bhutan Polytechnic on 22rd February 1974. During the initial stage of its development, the College offered Diploma programmes in Civil and Electrical Engineering and the Diploma in Mechanical Engineering was introduced from 1988. The College also offered certificate programmes in Surveying and Draughtsman from 1974 to 1978 and from 1986 to 1990. The enrolment into Certificate programmes was discontinued from 1988. JNEC was the only tertiary level institute providing education in engineering till 2001 with the mandate to meet the engineering manpower requirement of the country.

In April 2000, the then Royal Bhutan Polytechnic was temporarily shifted to Rinchending, Phuentsholing due to security reasons in south eastern part of the country and continued to offer Diploma in Civil, Electrical and Mechanical Engineering programmes from the Rinchending campus. While at Rinchending campus, two programmes at Bachelor’s level (Bachelor of Engineering in Civil Engineering and Bachelor of Engineering in Electrical Engineering) were introduced in August 2001 and the institute was named as Royal Bhutan Institute of Technology (RBIT), the present-day College of Science and Technology (CST). With the establishment of the Royal University of Bhutan in June 2003, JNEC (the then RBIT) became one of the constitute colleges of the Royal University of Bhutan (RUB).

In June 2006, the Diploma programmes offered at RBIT were relocated to its original campus in Dewathang and in August 2006, the College was re-named as Jigme Namgyel Polytechnic (JNP).  The name of the College ‘Jigme Namgyel Polytechnic’ and its location in Dewathang has great significance in the history of Bhutan honoring the Druk Desi, Jigme Namgyel, the father of the First King of Bhutan for his victory over British colonization from this location in 1841. In addition, on December 15, 2003, the Royal Bhutan Army lead by the Fourth Druk Gyalpo, His Majesty Jigme Singye Wangchuck conducted an Operation All Clear to drive away separatist insurgent groups from the neighboring state of India from the Bhutanese soil. Therefore, Jigme Namgyel Engineering College takes pride in being honored with the royal name of the father of the First King of Bhutan.

From July 2006, the Diploma programmes were reviewed and the duration of the programmes was reduced from three years to two and half years and the entry qualification changed from Class X pass to Class XII (Science) pass. Subsequent review of the Diploma programmes was carried out in 2008 and the duration was reduced from two and half years to two years and accordingly aligned with the regulations of the RUB.

To keep pace with the infrastructural development initiative of the country and to meet the increasing demand for technical graduates, the enrolment of students in all the programmes were increased by almost 100 percent from 2006 to 2011. New academic programmes were planned on priority basis and subsequently, a total of five new programmes were introduced from 2010 to 2015 including the first Bachelor’s programme in Dewathang campus; Bachelor of Engineering in Power Engineering. On 27th October 2015, the name of the College was changed to Jigme Namgyel Engineering College with the inauguration of the Bachelor of Engineering in Power Engineering programme by His Excellency (Dasho) Tshering Tobgay, Hon’ble Prime Minister of Bhutan.

The College aspires to become the centre of excellence in providing applied engineering and management programmes, continuing education programmes, material testing and certification, research, consultancy and community services through various modes of deliveries. The College currently offers ten academic programmes; seven Diploma and three Bachelor of Engineering. The College continues to explore, plan and offer academic programmes based on the socio-economic needs of the country.

The academic programmes offered at JNEC are targeted towards meeting the engineering and management manpower requirement of the country to support the country’s infrastructure development. As the country’s GDP grows, the living standard of people is expected to change and thereby demand better infrastructure facilities and increased level of consumption of resources. The graduates of JNEC will have to be responsive to these changes and contribute towards the socio-economic development of the country. The College continues to be mindful of the gaps in the international market for engineering and management personnel and therefore strive towards providing quality education to enable graduates to find employment globally. The College also encourages international students to undertake quality education and training in JNEC.