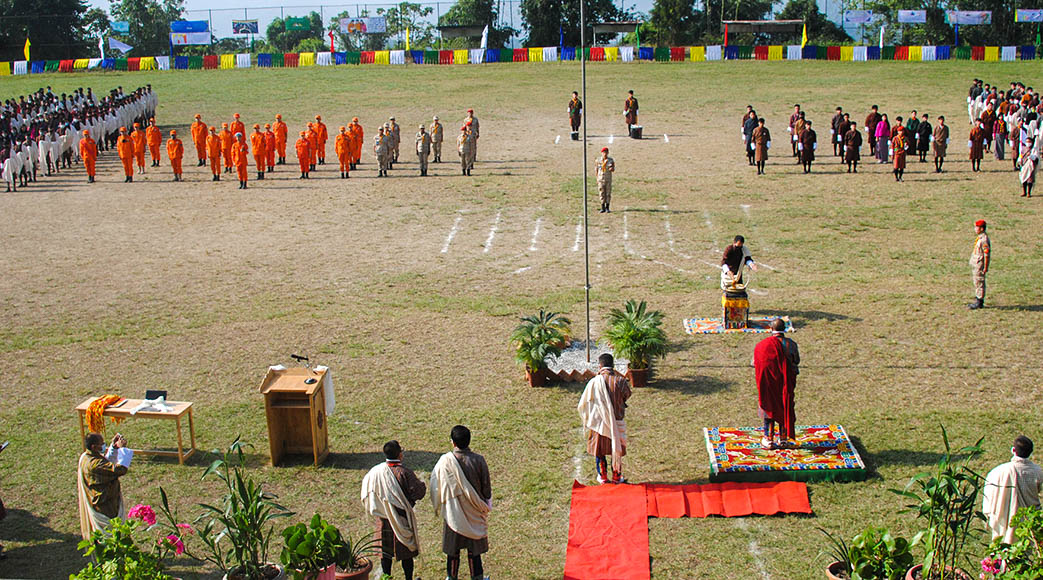 Jigme Namgyel Engineering College joined the nation in celebrating the 13th Coronation Anniversary of His Majesty The Druk Gyalpo, Jigme Khesar Namgyel Wangchuck on 1st November, 2021. The program began with offering of butter lamp, followed by recitation of Zhabten for His Majesty the 5th Druk Gyelpo’s  well being.

In his address to the gathering Dasho informed that this event is very auspicious and we all should celebrate and pay tribute to His Majesty’s selfless service to the People of Bhutan during his 13 glorious years as the 5th King of Bhutan.

Dasho then quoted the following words of wisdom from HM’s heart-warming coronation speech to the nation in 2008, which he said is ‘very much relevant in this present context.’ “Throughout my reign I will never rule you as a King. I will protect you as a parent, care for you as a brother and serve you as a son. I shall give you everything and keep nothing; I shall live such a life as a good human being that you may find it worthy to serve as an example for your children; I have no personal goals other than to fulfill your hopes and aspirations. I shall always serve you, day and night, in the spirit of kindness, justice and equality”, Dasho quoted.

Dasho further highlighted on His Majesty’s visionary initiatives to build the nation and welfare programs to serve the people of Bhutan thus far. He said His Majesty visited every corner of the country to study the land issues and so far has granted land kidu to around 33,000 landless farmers. Further in order to ‘reach the kidu to unreached people’ His Majesty has set up a Gyaltshab Office in Gyalpozhing, Mongar.

On top of it, Dasho explained to students how His Majesty established Druk Holding and Investments Ltd. (DHI) in 2007, to make Bhutan’s economy globally competitive. DHI is the commercial arm of the Royal Government of Bhutan.

Dasho noted that no matter what level your qualification is,  leadership quality is what matters the most ultimately. Accordingly to promote excellence in leadership, and  governance and strategic studies, His Majesty also established the Royal Institute for Governance and Strategic Studies (RIGSS), a premier leadership institute and a think tank in 2013.

Similarly, Dasho shared that the Jigme Singye Wangchuck School of Law at Taba, Thimphu, was established through a Royal Charter on February 21, 2015, focused on creating an effective legal fraternity consisting of educated, well-trained, and socially responsible professionals. Likewise, on 21st of February 2016, His Majesty established the Royal Academy in Paro as a model school to give best  education to the best students in the country, who aren’t just academically competent but also embedded with values and civic sense.

Other farsighted, visionary initiative of His Majesty, Dasho said was the establishment of Desuung – The Guardain of Peace, with the objectives to inculcate sense of belonginess, amity, friendship, unity and harmony amongst the Bhutanese. Dasho heartily thanked all the Desuups volunteers for their service during the pandemic and also congratulated the De-suung fraternity for the Druk Thuksey Medal from His Majesty The King.

Dasho then highlighted on the ongoing Gyalsung Project at 5 different location in the country; Jamtsholing (Samtse), Tareythang (Sarpang), Pemathang (Samdrup Jongkhar) Khotokha (Wangdueprodrang) and Bondeyma (Monggar). The Gyalsung is envisioned as a one-year integrated training program mandatory for all youth attaining the age of 18 and if in school – upon completion of grade twelve.

Dasho also then called attention to the progress made by Bhutan in handling the Covid 19 pandemic. As of 1st November, Bhutan marked 78th day without any local transmission and it’s a big achievement. However, Dasho cautioned that the people should not be complacent and should continue to strictly follow the Covid-19 protocols. Globally, the new covid cases are still increasing and people are still dying of covid complications.

Dasho additionally spoke on the values such as ‘Tha Damtshi and Ley Judrey’ and integrity. He requested the students who would be soon entering the job market “to focus in your work, be committed and try to learn new things”. He said that knowledge is important but “it should be backed by commitment and integrity”.

Dasho requested everyone in the gathering to offer deep prayers for His Majesty’s long life and blessings for prosperous economic growth, peace and security under His Majesty’s dynamic leadership.

Dasho then wished the gathering a very happy coronation anniversary of our Beloved King and also wished all the students to do well in their forth coming semester exam.

Later, Dasho also graced the launching of the first edition of the Journal of Applied Engineering, Technology and Management which is hosted online. The online journal was launched to commemorate the 13th Coronation Anniversary of His Majesty The Druk Gyalpo

Besides, Dasho granted a generous sum of Nu. 35000/- as soelra to the students and also awarded soelras to the winners of the question answer session during the celebration.

The celebration concluded with the cultural programs and fun sports followed by Tashi Labay.