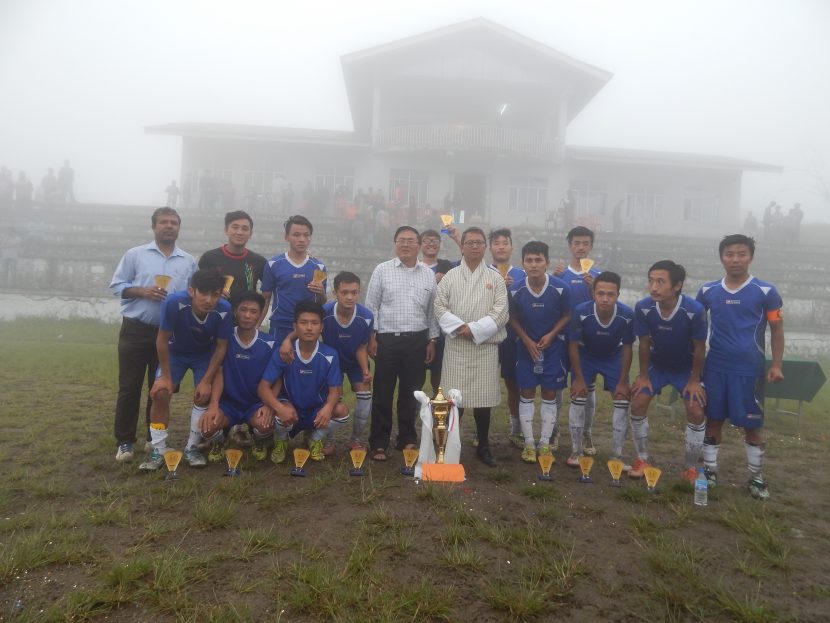 GCBS team emerged as the champions in the 2nd JNEC Open football tournament by defeating the Dragon FC by 3-0 in the final played on 15th May at Thangzor Stadium, Jigme Namgyel Engineering College.
It was a close contest, but the GCBS emerged as the favorite team to win this year’s JNEC Open trophy. The remarkable skills and pace of the GCBS team outplayed the Dragon FC.
Kelzang Namgay opened the scoring by converting a corner kick with a stunning header and GCBS took the lead in 18thminutes.  In the 28th minutes Tashi Dorji found the net and made it 2-0 after a brilliant assist from Ngawang Tashi, the top scorer of the team. Ngawang Tashi was looking to snatch the highest scorer prize money but he was rarely given a change. However he managed to score towards the end of the first half to take the score tally to 10 goals in the tournament but 2 goals short to take the top scorer prize. Jigme Wangchuk, the striker of JNEC XI team took the highest scorer prize with 11 goals.
Dragon boys failed to capitalize on few changes they got in the match. In the dying minutes in the first half Dorji Wangchuk of Dragon FC shot a brilliant ball only to be denied by the goalie. Again in the 67th minutes, Tshering Wangchuk struck a stunning ball but the GCBS goalie made a fine fingertip save.
GCBS lifted the trophy with a cash prize of Nu. 70,000/- while the runners-up team took a cash prize of Nu. 35,000/-.
Dr. Andu Dukpa, the Director of Jigme Namgyel Engineering College and the Chair-person of the JNEC Open organizing committee, in his closing remarks congratulated both the finalist and thanked all the teams who participated in the tournament. He said that the tournament was organized to bring harmony in the community and also to promote the importance of health and wellbeing through sports and physical activities.